Carbon emissions, and their ozone-depleting impact on global warming, have become an increasingly important consideration for our planet. As individuals, we are encouraged to make purchasing decisions that are likely to have as little negative environmental impact as possible, including such things as whether we consume beef at a cost of 26 kilograms (kg) of carbon dioxide equivalence (CO2 e) per kg of beef consumed, or whether we buy a vehicle with a Start/Stop battery that reduces our fuel consumption by roughly 9%. We are encouraged to purchase energy-efficient fridges and stoves, and to install LED lighting instead of incandescent light bulbs. We are encouraged to buy fruit, vegetables and meat that are locally produced, to reduce the ‘carbon miles’ of our food, and to take shorter showers and fewer baths to reduce the likelihood of potable water shortages.

Companies are encouraged to not only reduce electricity and fuel consumption, but also to produce products that are designed to reduce the full life cycle environmental impacts, such as how much of the materials used to produce batteries can be fully recycled.

In the end, it’s all about being a “socially responsible manufacturer”. It’s about understanding the negative impacts we may have on the physical/natural environment and ensuring that in all we do, we consider the social implications of how our employees manufacture our goods.

Established in 1945, Mutlu Akü has become one of the most prominent battery manufacturers in Europe, the Middle East and Eastern Europe, with a strong commitment to excellence in product quality, customer service and employee well-being.

Our main production facility is based in the Tuzla region of Istanbul on the outskirts of one of Europe’s oldest megacities. Although residential neighbourhoods are expanding towards our perimeter, the factory is situated in a low residential density area approximately 60 km away from the city centre, in an area not well-serviced by public transportation infrastructure.

Based on 2016 data supplied by the Inrix Global Traffic Scorecard, Istanbul is ranked 15th in the world (of over 1 000 cities measured) in terms of the amount of time spent in traffic congestion (where average speed is less than 65% of the normal). This congestion not only impacts air quality due to increased emissions from vehicles idling and/or travelling below normal speeds, but also increases tension in drivers. Congestion decreases the amount of time parents can spend with their families, increases fuel and maintenance costs on commuter vehicles, and raises the risk of physical harm in road rage related accidents. In general, increased time spent in traffic can also be correlated back to a city’s overall economic efficiency due to lower productivity rates arising from issues such as late arrivals and lost days due to impacts on mental and physical health.

At Mutlu Akü, the provision of company-supplied shuttle buses plays a key role in improving overall worker wellness, a union requirement that has proven to be a benefit not only to employees, but to the company as a whole. Rather than battling congestion on the roads, employees are able to rest in relative comfort while being driven to and from work. While it’s difficult to effectively estimate the economic benefit of providing shuttle buses, it’s relatively easy to calculate what the provision of buses means in terms of direct environmental effect.

On a daily basis, roughly 1 030 of our total workforce of 1 130 employees rely on 56 company-supplied shuttle buses, rather than on their own vehicles. The other 100 drive their own vehicles. The provision of buses has a direct impact on the amount of fuel consumed by employee-owned vehicles, and thus a direct impact on the amount of CO2 e generated by the workforce and expelled into the atmosphere. Assuming that ‘Instanbulers’ only carpool at the same rate as Americans – 76% of Americans admit to driving their own car to work alone – this means that in the absence of shuttle buses, 859 employee-owned vehicles would drive to and from work on a daily basis.

Based on our analysis, we estimate that the provision of shuttle buses reduces the workforce consumption of fuel, and thus carbon emissions, by 67.36%.

If all employees were to drive their own cars to work, they would have to plant 7 645 trees every year to off-set the harmful impacts of the carbon emitted into the atmosphere. By providing company shuttle buses, Mutlu Akü has reduced the draw on nature’s own carbon neutralisation by 5 149 trees – trees that can now focus on off-setting 2 348 tonnes of other companies’ emissions.

As Mutlu Akü continues to investigate ways in which we can further reduce our impacts on the environment, we will use our transportation model as an example of how focussing on worker wellness can also affect the wellness of our planet. It also supports the economic sustainability not only of the company, but also of the people who drive our success. 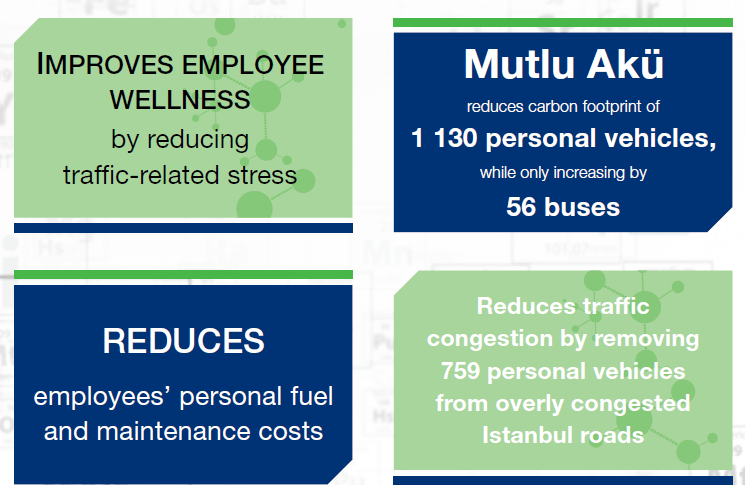 Support combating the spread of Covid-19.
National Lockdown from March 26 until April 16.